A week ago, I sat in the “Exki” at the Paris Airport and wrote my first post “Ready, but for what”. Well, thank God I was ready for the sneaky cold here. My mom urged me to buy this “Jack Wolfskin” jacket and my dad to buy an -15 degree sleeping bag. At the time I thought this was really not necessary, but now, as I’m sometimes using the “Jack Wolfskin” fleece and the sleeping bag combined, the contrary is definitely proven.

At the airport in Santiago, the EPA’s sound technician Jaime picked me up and dropped off Theresa, who just had finished her 1-year voluntary service in the EPA and was now leaving teary-eyed. Leaving the mountains behind, we headed for Achupallas, Viña del Mar. In my new home I was welcomed by Sra. Carmen with a full meal at 2 o’clock, which I figured later is the usual lunch time here. After my first night (in my sleeping bag wearing a fleece), I went to take a look at my new working place where I got a fantastic and warm welcome. The luck on my side, that evening was held the second part of the “Conciertos de Invierno” (winter concerts) and I was surprised by all the talent that I could witness. Later Alexis, the school’s coordinator invited me to participate in a band rehearsal and after three days of abstention I could make some music again. On Saturday then, third part of the “Conciertos de Invierno”. The school’s bigband playing traditional chilean music and the percussion ensemble grooving its way through latin rhythms were fantastic moments of that day. Again I was very lucky because a young ex-volunteer Becci was introduced to me and after four days of communicating in my very bad Spanish and trying to understand this very fast spoken dialect, in which I think every second letter isn’t pronounced, I could speak German again. Knowing that it’s sometimes hard at the beginning to get in touch with the new culture and the people, Becci immediately took me out to show me some great places and to introduce me to some of her friends. First we went to Viña to attend a great chamber music concert in the “Teatro Municipal”  and later to “La Isla de la Phantasia” in Valparaíso, where we danced to “Cumbia” and I learnt a bit of the Chilean national dance “Cueca”. With a walk to the “playa” of Viña on Sunday the first four days in Chile were almost over and I was very eager to see what the new week would offer.

On Monday the process of getting settled in the EPA started and I’m now working on finding my spot in the school. By including me in meetings and giving me the chance to observe and participate in lessons of the professors, the team of the EPA helps me a lot to do that. With Alexis taking me to a rehearsal of a professional bigband in Valparaiso and today to a jazz event, I get to know the local music scene.
For all those who had the wildest imaginations about what would happen to me here (especially my old class mates), well this was my first week, let’s see what happens next ! 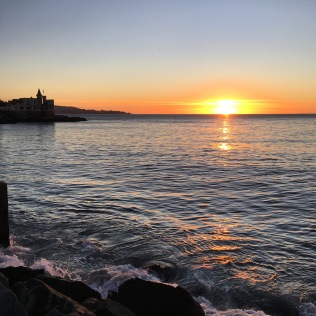